To begin with, can you tell us a bit about your practice, please?

I’m a painter. But I feel my work cannot be limited to the space of the canvas. I try to observe my surroundings, always attentive to collect found footage, both imagery and text in my environment. The next step is to decontextualize this information, before I attempt to redefine, reimagine and recontextualize those images and sometimes words in my work, through the environment of the painting. In my exhibitions I also use the architecture of the room to redimensionalize the space through the pieces (paintings, canvases) as well as allowing the works to be acten upon by the room and its existing dimensions. To underline this balance and dialogue I also work with sound, an important focus element for the many relations happening within a room, which is never just static.

How far are your paintings constructed and planned or is the process behind rather intuitive?

I would say it’s a balance between plan and intuition. Some steps in the painting process are very experiential and formal, they are decisions, but I try to remain open to chance encounters, to what can happen during the act of painting and be felt by the mind as a “coincidence”. I try to keep painting and my way of painting as playful, as a play between elements. I don’t like the idea of finding myself in a purely workman-like process. I prefer to deny a linear style or approach in my paintings. There is a concept that I always have by my side and on my side, but still I hope that more than readymade answers, the questions that I’m asking myself define the work and process.

Do the questions evolve out of the found footage or are these questions kind of the luggage you carry around with you all the time? Could you elaborate a bit further on the content/context of your works please?

The questions that arise while I’m working can come from different sources and directions. Sometimes the imagery that I’m interested in at the moment asks for new ways to approach them. But in general I have different questions and tasks that come up again and again in my practice. When it comes to composition and imagery, one thing that matters to me is how they function within my body of work, how they fit in. When in comes to the context of my painting, these questions may grow or change through the dialogue that I’m having with my work in that particular moment, but also in dialogue with the work of colleagues, and a lot through personal talks with friends who are also painters. The exchange with other painters, artists from other fields and also non-artists is very important for me. Sometimes you are too closed up within your own world and can’t really see the topics that matter to you anymore. Not to mention it’s impossible to ignore the political discourse of my age, what is happening in my personal life, the shows that I saw or the book that I’m reading, all this influences the way I’m perceiving my work and where the dialogues are heading.

So, one can also not speak about an individual work, but rather about a dialogue, as you are painting several ones at the same time. Is this more a situational operation or do you see your works in series?

I think I like the Idea of a constant dialogue between my works. I rather function as a translator. So when I work on several paintings simultaneously I might have a certain idea for a few of the works but while I’m working on them they tell me what the neighbour or opponent might need. It is also very interesting to see how old questions and discussions come up again when I work on new pieces. I might have not solved these questions before, and out of nothing the solution is found in a new work. I guess that’s one of many reasons why I keep on painting.

Not visible for public, but spoiling it now, you constantly collect, archive for yourself and then refer/employ daily images. Do you want to elaborate what kind of images these are? Is this where your main inspiration comes from?

It can basically be anything. In the very beginning of my work it really was some kind of nativity that attracted me. I guess that a certain self-made character in the everyday life still attracts me. A self-painted “COFFEE 1€” sign gets me every time. But in general it is hard to say. Sometimes I also look for the special moment. Resonantly I really look for color. I was in Mexico and brought a huge collection of pictures of different colour combinations with me. New contexts are defining for what I’m looking for. In general I like the idea of remains of an interaction. That can be a written shopping list that I find on the street or a photograph that tells me a story which I don’t know. In German you can say „merkwürdig“. In English it would be peculiar, odd or strange. Maybe the best word in this case is “noteworthy”. For me it literally means that image is worthy to be remembered. These are things that really interest me.

Hence are you getting reinspired while browsing through your collection or shall one rather imagine a specific search and then integration of the imagery?

Hard to say. Sometimes I look for a special and specific image or drawing that I made – maybe years ago – to include it in a recent painting.

How would you describe the relation between real imagery, abstract brush strokes and quite often wording on your canvases? Is there a different emphasis on each of them?

For the different elements that I use in my paintings I see different tasks. Words or found images could work as a way to attract the viewer’s attentions. Just like advertising might work. To use imagery that triggers something in the viewer’s head and hopefully start a dialogue. By using different elements like this, even if at first sight they seem randomly put together, I like to think that I can also start a confusion in this dialogue. The things you see might give you a direct idea of something but the rest doesn’t make sense in this context. The abstract moments are often references to painting itself. Also I like to play with the way people look at or read images. For example, you have a monochrome color field and on that you have a circle and a square. Our eyes are so conditioned that you directly recongnize these two elements as what they are. But if you fill the space between those objects with what may seem at first glace only random information, like abstract brush strokes, the sight of the viewer gets confused and the connection between the circle and the square comes into question. That is where it gets interesting for me.

What does your process of production look like? Are you constantly producing in your studio or are you working more specifically towards projects and hence wider aspects, like architecture, demographics and of course specific times become relevant?

It really depends. My ideal idea for the process, exhibition, project in the making, is to constantly be in a dialogue with myself and my works. That doesn’t mean that I always have to be in the studio for that. Traveling and seeing new things, experiencing new ideas, and being informed is a big part of it. For my recent show I worked a lot with an eye on what I did in the last two years, attentive to different moments in the older paintings. I started to focus on different contents and wanted to define those in a new context, point them out in my work. It was a new way to approach a new series and I really liked it because I could see old and new paintings as a whole. But there was also an action of also exclude some of the older themes which didn’t seem to bring new ideas to me anymore.

In the first answer you mentioned the importance of sound for your work and installtations. You sometimes DJ yourself – Does your music inspire your artworks and / or vice versa?

Music has a huge importance in my life. I would not say that it’s inspiring me in a way that I listen to a song and start to go crazy in the studio. But I like to compare music and painting to understand the essence of both. I guess there are a lot of practices that can be found in both worlds, such as sampling. To chop up found music tracks and rearrange the so found samples to something new is pretty much what I do in my practice. Also the general way to layer soundtrack over soundtrack to create a balanced composition is very similar to painting.

So where will your hunger for new inspiration take you next?

The recent travel to Mexico encouraged me to discover more of Latin America, like Brazil, for example. Also Europe has a lot of places to discover like Scandinavia and Eastern Europe. I really want to see Warsaw and Kiev. But for now nothing is planned. 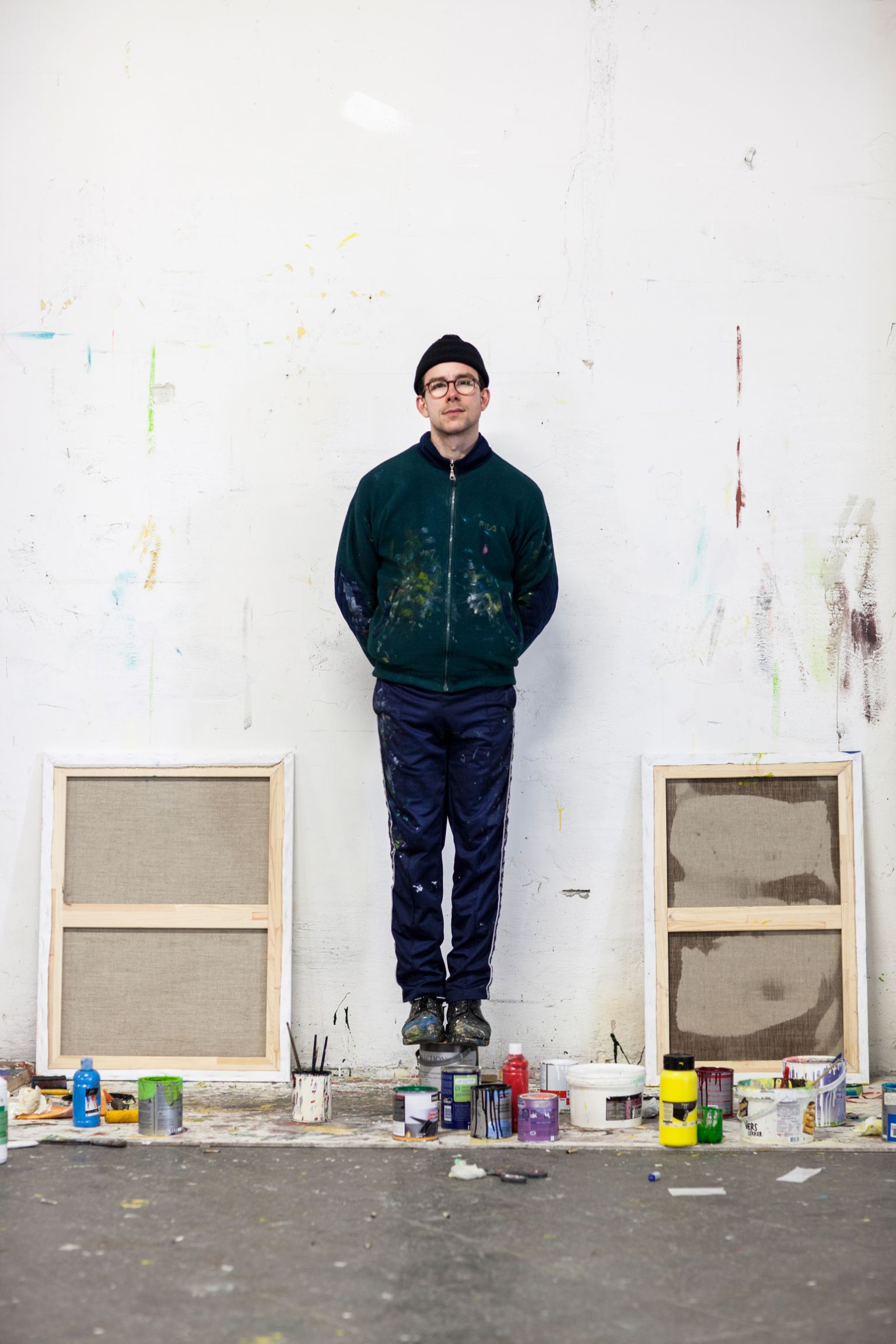 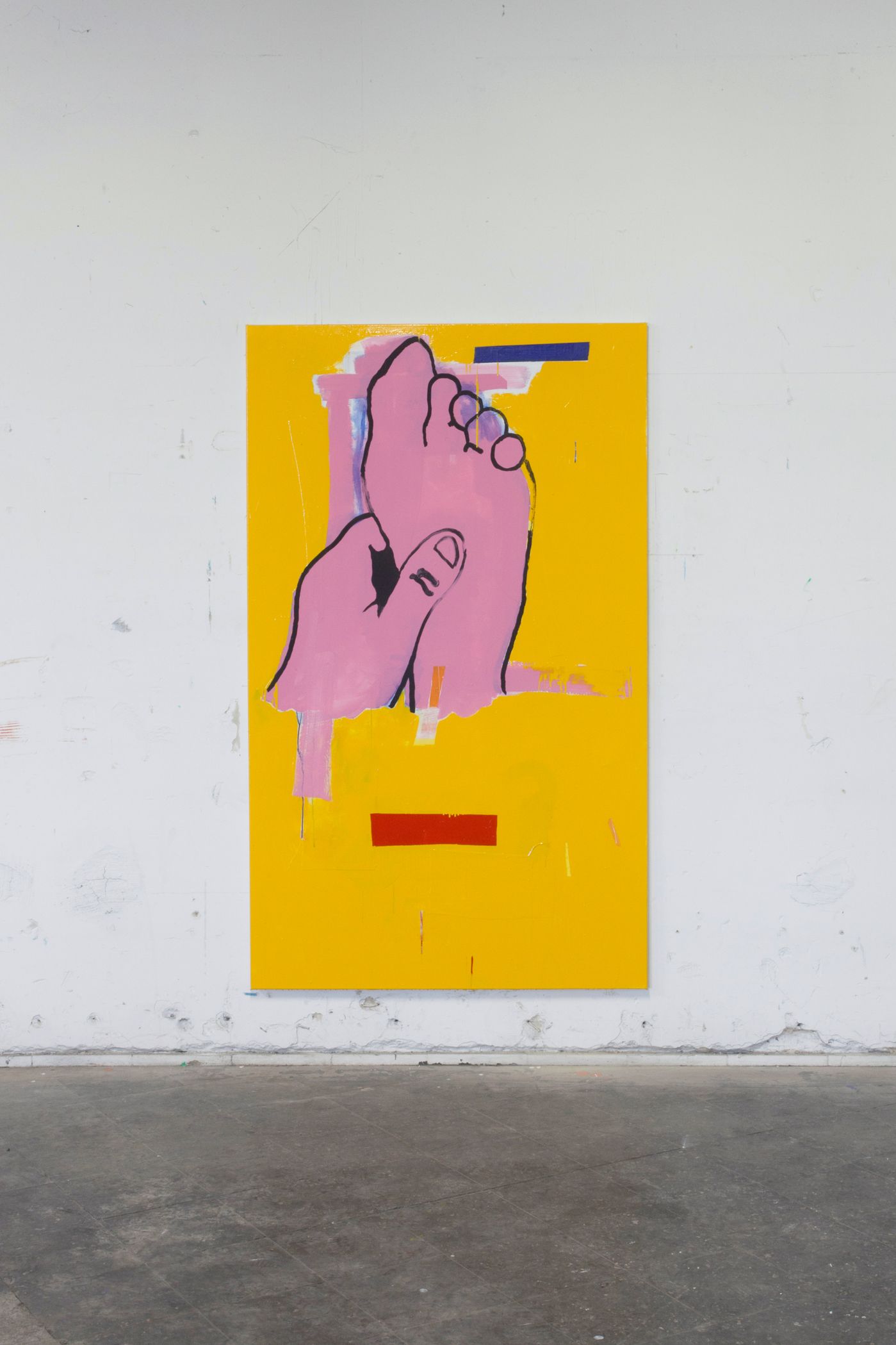 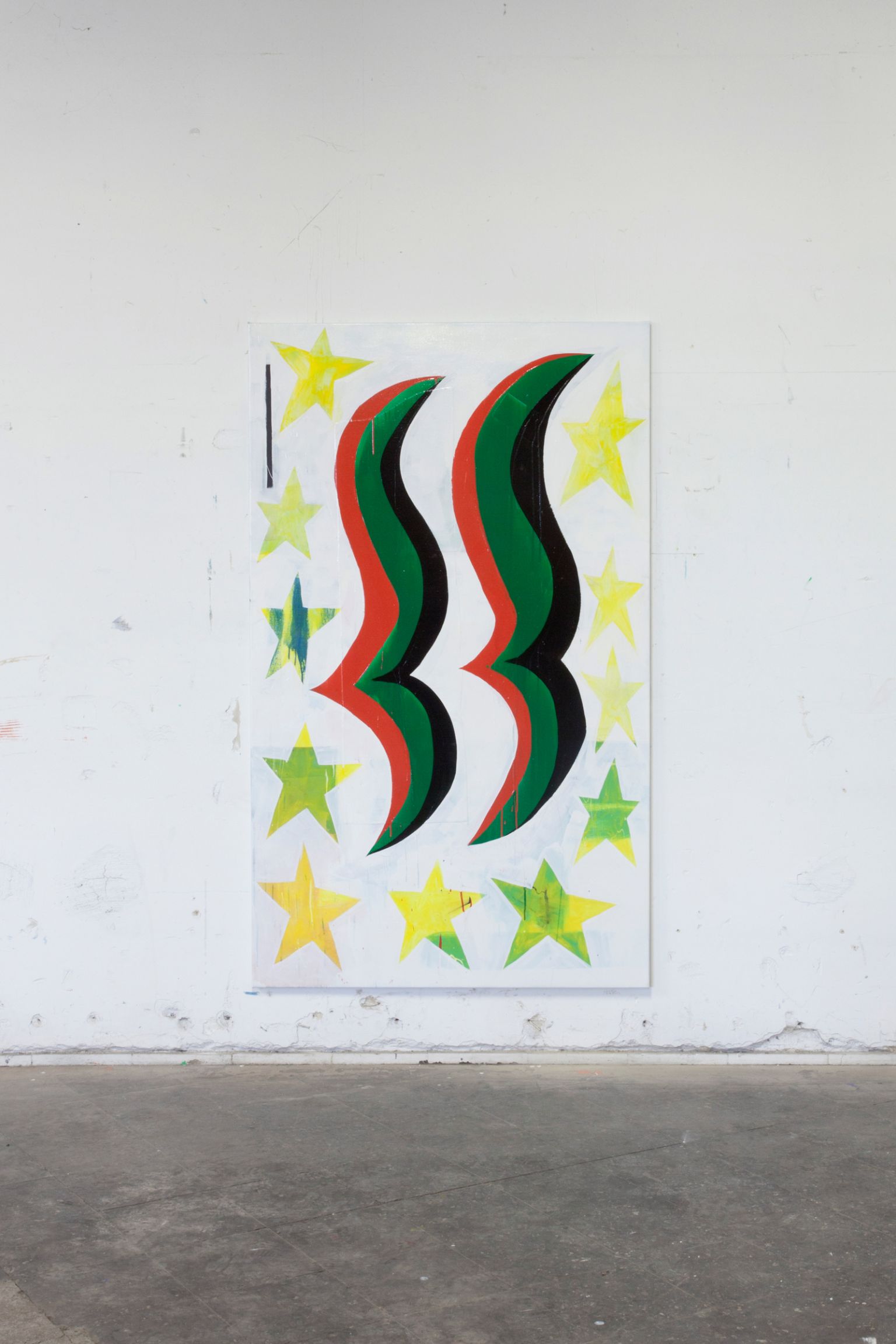 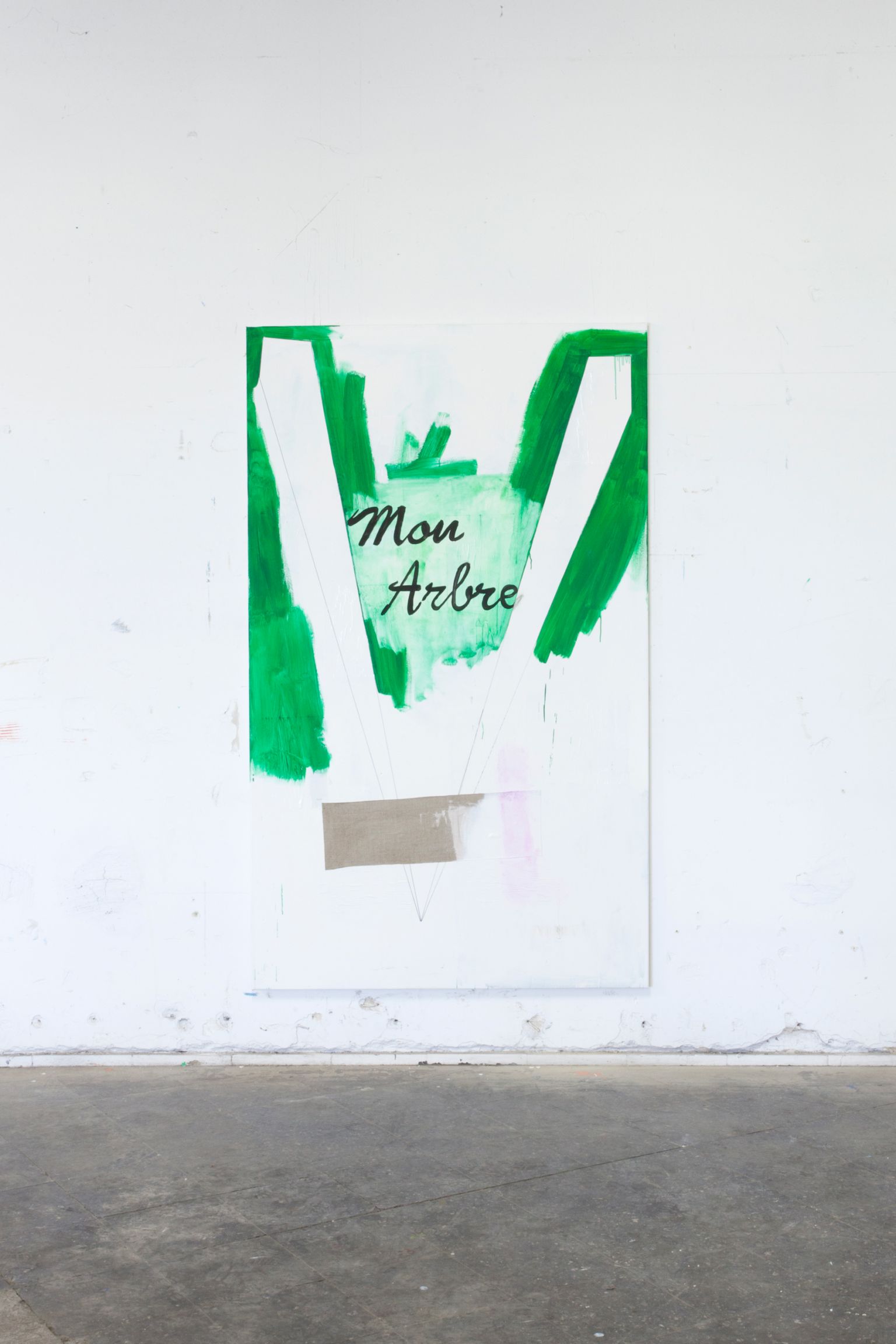 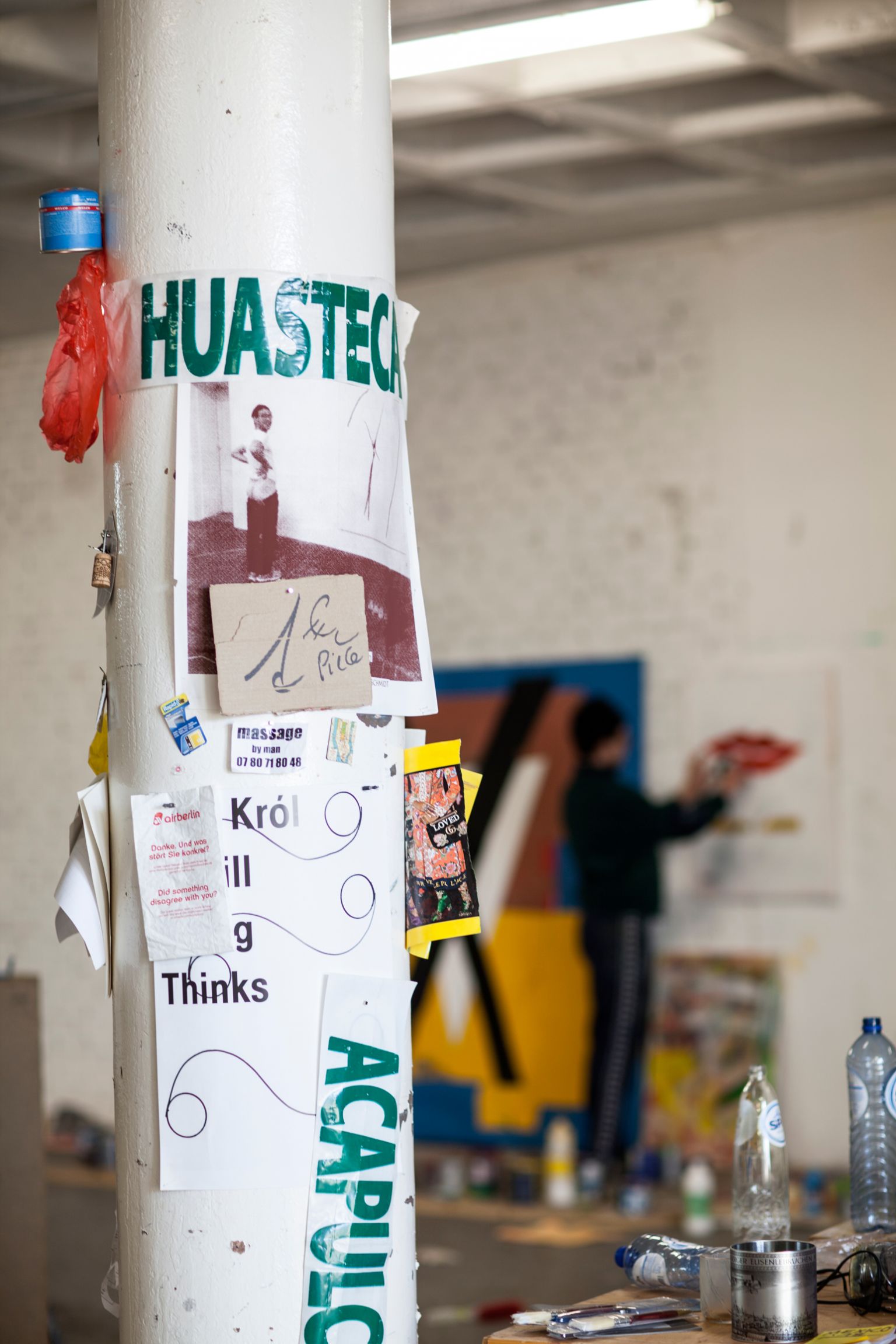 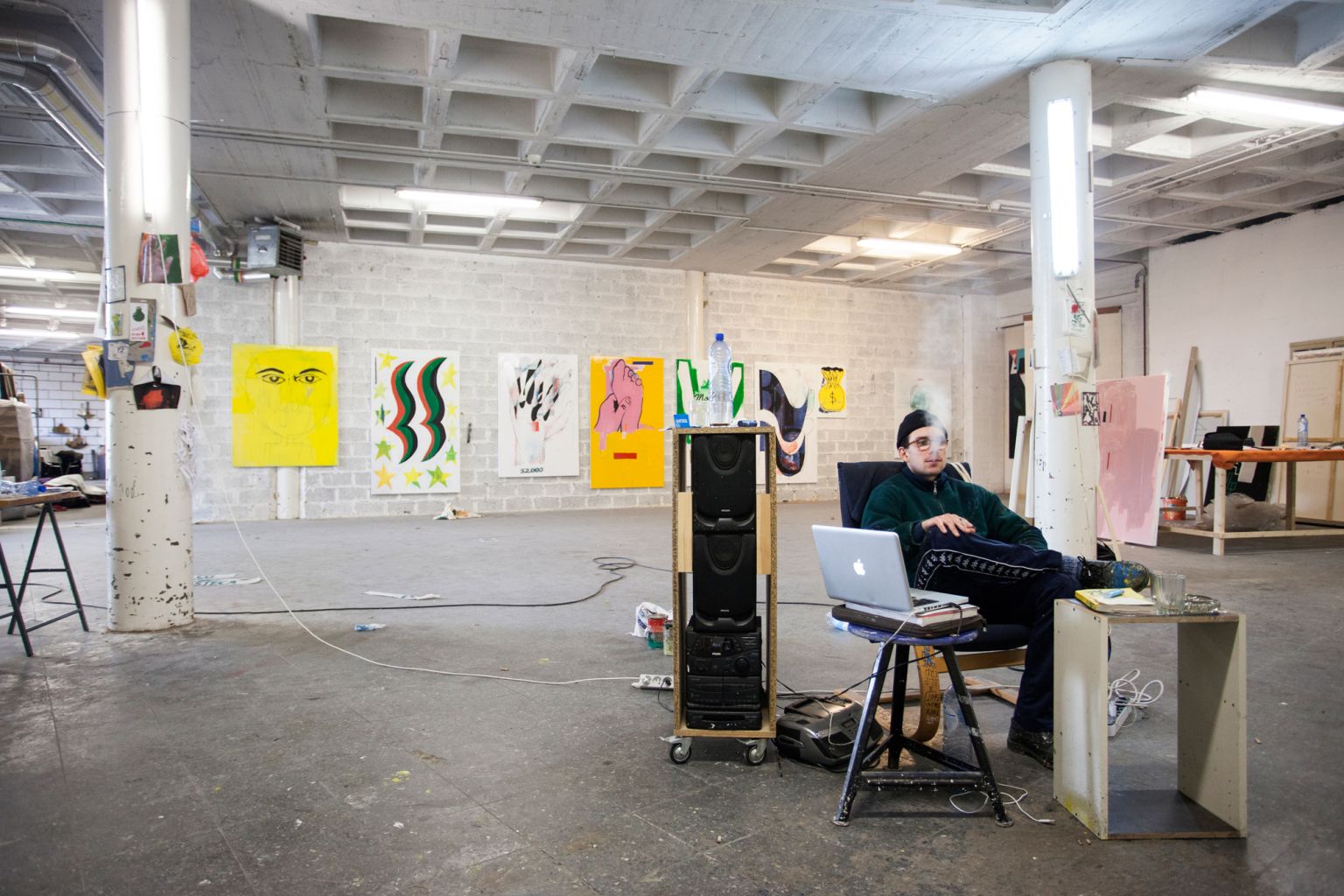